Flandrau State Park is located in New Ulm, Minnesota. It’s a 1 hour and 45 minute drive from Minneapolis and the park itself is located right within New Ulm city limits. For a rather small park, it has an impressive 81 campsites. I imagine it’s a popular place for the citizens of New Ulm to visit because it also has a large sand-bottom swimming pond. When we visited, not only was the pond closed because of COVID-19, they had also closed most of their campsites to keep the number of people within the park low.

Now that that’s covered, let me tell you about our biggest camping fail of 2020 (so far).

Audi (dog), Glenn (boyfriend) and I (your protagonist) arrived at Flandrau on a sweltering July Friday night. Temperatures were well into the 90s during the day but we hoped that we could get by in a shaded campsite. Red Flag #1.

As we set up our tent and started a fire (because even if it’s hot as the sun, what’s camping without a fire?) the park ranger came by to warn us of a severe thunderstorm that would be rolling through around 2 a.m. Red Flag #2.

Now would also be a good time to mention that the mosquitos were really bad and we were getting destroyed with big bites. Red Flag #3.

With two adults and a dog, our 2-person tent gets pretty cramped and we’d been toying around with the idea of sleeping in the back of our Jeep for a while. So we folded down the seats and moved our sleeping pads into the vehicle. Why not test it out on a night where we know it’s going to storm? Did I mentioned that the overnight temperature only got down into the 80s?  We are fools.

A few of our smarter neighbors packed up and left but we’ve been through storms before and figured that worst case scenario we would take shelter in the park building.

Around 11 p.m., we climb in the back of the Jeep. We can’t open the windows because of the bugs and immediately start to bake alive. We barely last 10 minutes before we are fleeing for the tent.

Except the damn tent is sweltering too. Where was this storm we were supposed to have? We get desperate and remove the rain cover from the top of the tent to get some semblance of cool air. We finally fall asleep.

2:30 a.m. we awake to the noises of a storm brewing and we are the geniuses who don’t have a rain cover on the tent. We groggily and sweatily climb out and throw it back on. The storm worsens. This time we flee back into the jeep without any bedding. Audi is very confused. I try to sleep in the back on the hard Jeep seats while Glenn sleeps in the driver seat and occasionally turns the vehicle so we can have some air conditioning. We may have fallen asleep with the car on at one point and woke up in an igloo.

The storm didn’t end up being that bad and our Jeep-sleeping experiment was a colossal fail much like the majority of 2020.

Around 6 a.m., I move back into the tent to try to get some rest. I awoke feeling absolutely God awful because I’m 32 and not 22 and my body was like, “why have you done this to me?!”

Oh yeah, it was also around this time that I realized I had forgotten to pack dog food so we headed into town to buy some. Ten years of dog ownership and I think this is the first time that’s ever happened! 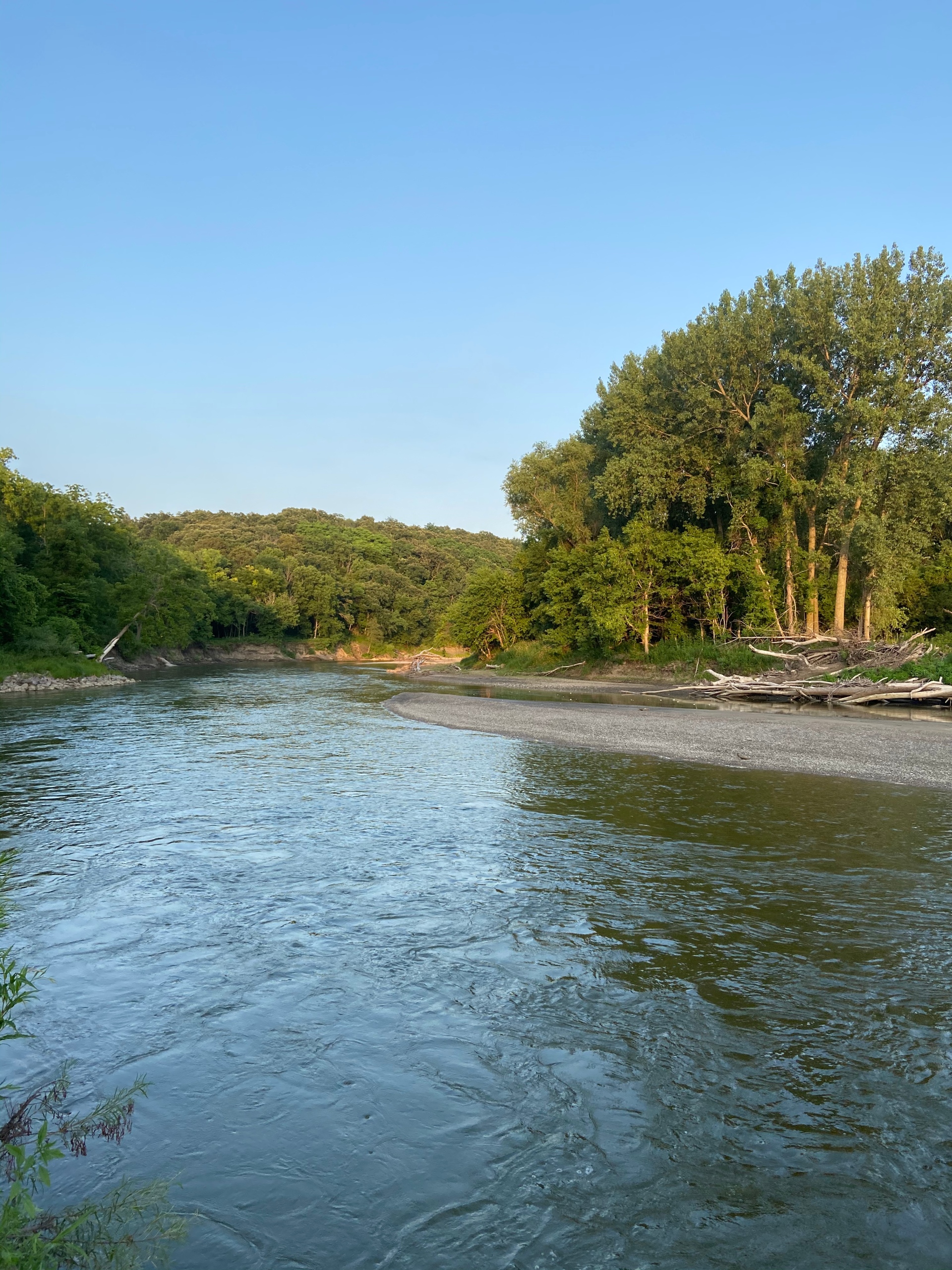 We tried to salvage the trip by going on a hike along the River Loop trail. It was actually a really beautiful hike that almost made up for the fact that we had gotten no sleep and it was already 80 degrees at 9 a.m.

When we got back from the hike, I fell asleep in the tent again. Because I’m 32. I woke up a few hours later to the smell of breakfast brats as my boyfriend was basically tailgating at 10 a.m. with Coors lite, loud music, a fire, BBQ and fresh coffee.  At least someone was in good spirits.

We then realized there was another storm in the forecast for that night. Another night of no sleep? With my comfy bed at home less than 2 hours away? I think not. We packed up our things around midday and hit the road.

On our way back to the Twin Cities we took a detour to Fort Ridgley State Park. It was the site of the Battle of Fort Ridgley during the Dakota War of 1862. “Built in 1853 to keep peace as settler-colonists poured into the former Dakota lands, this fort withstood several attacks in the US-Dakota War of 1862 and became a training ground for Civil War recruits.” The stone foundations of the fort buildings are still there and we spent as much time as the heat would allow reading about its history before continuing on home.

We’ve had so many incredible trips this summer but sometimes you just have to take the L. As much as I love the great outdoors, that night I climbed into my king size bed with the cool breeze of central air conditioning on my face and was completely happy to be in the great indoors.

One thought on “Camping FAIL at Flandrau State Park”